Duvet Vs. Comforter: Which is Best For You 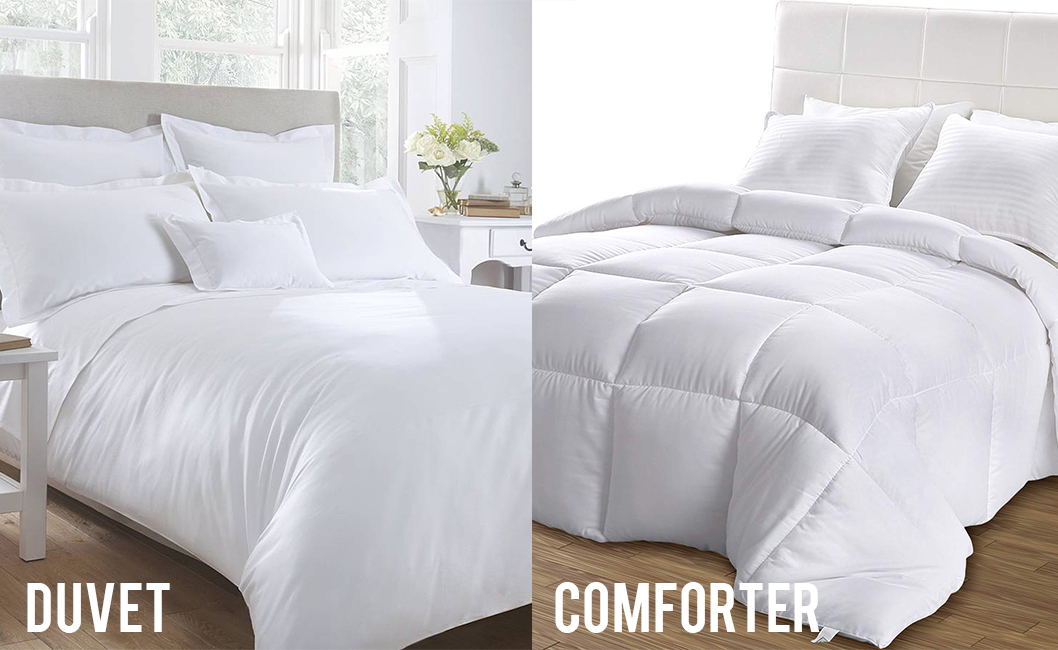 Unless you’re an interior decorator, the bedding section of your local department store or Bed Bath And Beyond can be a bit overwhelming. What is a dust cover anyway? What’s the difference between a sham and a pillow case?

If you’re looking for bedspreads, you’ll usually find both duvets and comforters right next to one another. That leads to two questions. What’s the difference between duvet and comforter sets? Which is best, duvet or comforter? Things get a bit confusing because many sellers use the terms interchangeably. Keep reading to learn the differences.

What is a Comforter?

A comforter can often be described as thick, padded quilt. It may be filled with batting, down, or other material. Comforters often have a pattern sewn into them like a quilt. This generally holds the filling in place, and keeps it uniformly distributed.

What is a Duvet?

A duvet doesn’t have any sewn in patterns. It is essentially a flat, cloth sack that has been filled with down, batting, or other material. The material used to stuff a duvet is not held in place. It can be moved around the inside of the sack. Duvets aren’t meant to be used as is. They are placed inside of a duvet cover. This is basically a large version of a pillowcase.

Duvet Versus Comforter: How do You Tell The Difference

Here’s where things get complicated. Even if you know the difference between the two, you should still double check before you make a purchase. These terms aren’t regulated. Both stores and manufacturers will sell products that don’t adhere to these definitions. Here are a few things to check:

Now What? Choosing The Best Bedspread

What you choose depends largely on your sleeping preferences, and your choice of decor. If you like a very matched look, and want to keep the same look over time, consider a comforter set. Many people who choose this option will buy one bedding set for cool weather and one for warm weather.

If you like to change your decor out a bit, try a duvet. You can make your bedroom look a bit different, just by swapping out your duvet cover.

Comforters are meant to go with sheet sets and pillow cases. They also hang over the sides of the bed. A duvet usually goes only from edge to edge. It’s tradition to sleep directly under a duvet without a top sheet.  Finally, a duvet is a less work when it comes to making your bed. Comforters are bulkier, and take a bit of effort, especially on a queen or king bed.

Quilt Vs. Comforter And Other Choices

Of course, a duvet and a comforter aren’t your only choices. If you’d like a lightweight option to avoid overheating, try a quilt instead. If you prefer a basic look, and want to keep warm, a blanket might be a good choice. Both quilts and blankets are good options for guest rooms and kids’ bedrooms because of their simplicity.

A down duvet is is actually the best temperature regulating option you can get.

Real down allows moisture to escape where as the man made materials in comforters trap moisture in, causing people to wake up in the middle of the night wet and uncomfortable.

Lots of people think they can only be used in the winter, but duvets are a great year round option when partnered with the right duvet cover.

Duvets have a significantly longer life span than comforters, which yes of course means they carry a larger price tag.
Duvets do come with a way to keep the material inside them from moving around.

Almost all duvets have baffle boxing in them, this is a grid like structure inside of them, each section of which holds its own (all equal) amount of filler, whether it be down alternative or real down.

Duvet covers can be purchased as part of a set with shams included.

Comforters do not automatically hang ove the bed more than a duvet. The dimensions for comforters do vary, but buying a comfort vs. A duvet does not guarantee that feature.

Also a bedspread is a completely different thing separate from duvets and comforters.

Just an interesting fact about down, whether it’s on a duvet or a pillow… people arent actually allergic to down like everyone thinks.

What we are allergic to is the stuff that sticks to down really well. Keeping a down duvet clean can help allergy sufferers sleep more comfortable.